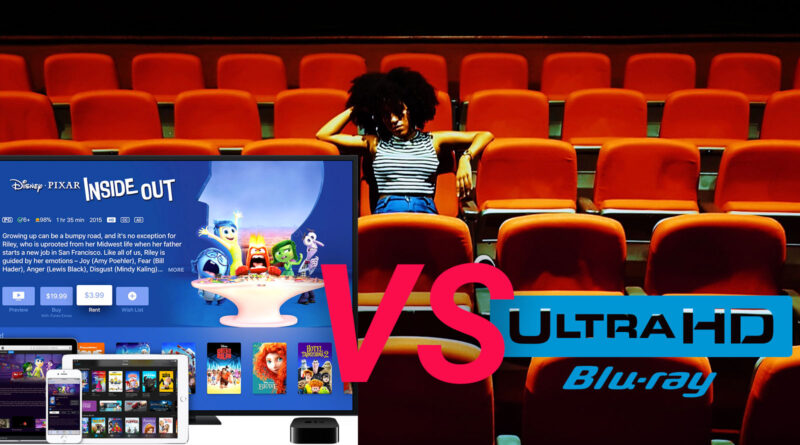 Way back in 2007, I wrote about how digital distribution would impact sales of music and film. In 2019, the impact of streaming music services have certainly disrupted the physical disc market and with the speed of internet services we enjoy today compared to 12 years ago – movies are the next target. The rampant broadband bandwidth expansion allows us to stream full 4K video with HDR, Dolby Vision and Dolby Atmos surround sound – so now more than ever, physical media needs to up its game to remain relevant in this new streaming media world.

Unfortunately, the 4K Blu-ray discs that should in theory provide the very best 4K entertainment can provide, instead struggles to compete and I will explain why…

Dolby Vision is considered the best possible way to experience high dynamic range, or simply speaking – provides a clearer distinction between the very dark and very bright areas of a scene on a per-scene basis. Many movies support Dolby Vision, with more and more flooding the market, yet here is the first issue I have with 4K Blu-ray, or at least how the industry is handling the format.

There are many instances where a movie is released, let’s take The Lion King, one of my favourite films of all time, where the 4K Blu-ray disc version features HDR10 only – whereas some of the streaming services support Dolby Vision as well. Is this is a technical issue? Of course not, instead this could simply be down to movie studios working with online streaming services to offer exclusive features and content. Whatever the reason is though, the so-called ‘premium’ version of The Lion King that you would usually associate with a physical disc format, misses out on this key ‘Dolby Vision’ feature. Disappointing!

Recently I purchased the Apple TV (4K version), mainly to take advantage of the various streaming services rather than to purchase any 4K titles from the iTunes Movies catalogue. When a film on 4K Blu-ray is first released, you can expect to pay between £20 to £25 for the disc format – with £25 the most common. The same title on my Apple TV can be purchased for around £13.99, featuring 4K resolution, HDR10, possibly Dolby Vision and even Dolby Atmos (using Dolby Digital Plus). Aquaman is a good example, £13.99 on iTunes Movies – £24.99 on 4K Blu-ray.

So I have to make a decision, should I pay up to an extra £11 for a higher bitrate video and audio experience or should I save a considerable amount of pennies and opt instead for the digital streaming version? We are not talking small pocket change here, so unless the film is something really special, I am now more often than not purchasing the digital version.

So purchasing a 4K Blu-ray usually consists of popping down to the shop or ordering the disc online and waiting for your next day delivery to arrive in the post. Already, waiting feels like an old fashioned concept – but of course, there is another option.

Simply sit on your sofa, press a few buttons on your remote control and you are watching a film you just purchased within moments. The temptation of browsing a movie catalogue through your TV and then watching it with no delay is just another nail in the coffin for 4K Blu-ray.

HD upgraded to 4K for free!

Movie services, Apple being the first, declared that any HD version of a film you purchased through iTunes movies – where a 4K version exists, it will be automatically upgraded – for free!

This is certainly not a complaint on my part, this is actually a fantastic and quite frankly shocking turn of events and others have followed too. This is just another nail in the coffin though for 4K Blu-ray, as any of my favourite films I have already in HD on iTunes Movies will reap the benefit and I am again less likely to purchase a physical disc version.

It is not all bad news for 4K Blu-ray and certainly for action movies or fast moving imagery – the disc is still king with its far higher video bitrates and supporting the highest quality audio formats such as DTS:X and Dolby Atmos through Dolby TrueHD. However, the price difference between digital and physical media is vast and anyone today looking at the differences will be hard pressed to consider paying more, when on some occasions you will even receive less.

Samsung have indicated they are not making any more 4K Blu-ray players and all of this is deeply troubling. I truly hope this isn’t the slow demise of the format, but unless they start tackling these very real problems – more and more people will look elsewhere for their 4K movie content. Where once I would only ever buy the disc version of a film, now I am content to buy mostly digital and only on rare occasions opting for the pricier physical disc.