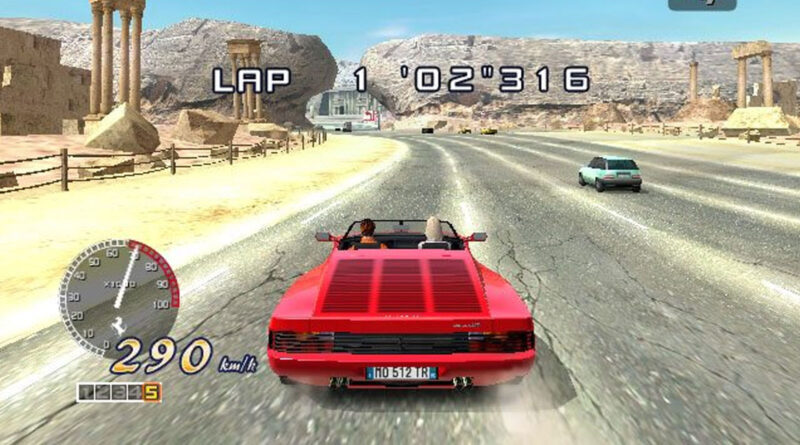 When I think of the original Outrun game all those years ago, the term ‘classic’ screams from every letter of that title. As I think back at the fond memories Outrun provided while I was perched over an arcade machine with its steering wheel, 2 foot pedals and that all important Low and High gear lever, I could only stop jumping around the house when I heard Outrun 2 was coming to Xbox exclusively by running outside into the rain.

SEGA for me have achieved arcade perfection with most of their titles that have been converted to a console, so I am hoping for more of the same with something new and this is in the way of Xbox Live online multiplayer which is sure to get us grinning.

Do not expect cornering methods like RalliSport Challenge 2. This is solid and I am happy to say arcade at its best. Just like the original at the arcades, Out run 2 features that very fashionable lady which you need to impress otherwise she will soon become a pain in the backside as she strikes you as you fail to complete the race.

For the Outrun purists, Outrun 2 is a virtual clone of the original even containing the original music all be it enhanced in various ways and styles. The game sees you yet again traveling in your Ferrari, although not just limited to one vehicle you can choose from a wide range of only red Ferrari favourites including the Enzo. Outrun was all about pure arcade addiction and Outrun 2 has included an almost complete copy of this thrill.

In Arcade mode you can either go left or right selecting your preferred route after each checkpoint which varies in difficulty and visual design. Heading left will select an easier route and to the right an increasingly hard track. Strangely enough it was this most I felt quite lack luster and although bringing back some wonderful memories from my childhood, did not do anything for me at all. Instead you should be targeting the impressive Mission Mode.

Mission Mode adds 101 exclusive Xbox Missions where on completion you can unlock extra features to the game such as locked cars and even the original music in its tinny synth form. You are given tasks such as racing along the right coloured strip on the road avoiding the other colours which will remove points. Others include avoiding any vehicles, weaving between cones and a few more little mildly interesting modes. This is where you will spend most of your time as even though the Arcade mode brings back so many memories of the original, it is actually quite boring and if it were not for the mission modes this game would be a very poor title indeed.

With typical SEGA fashion you have a fantastic menu interface with all the razzmatazz of an arcade game. However all the music is in stereo and not in full 5.1 which is a big shame for a title like this. Even the game sounds hardly ever make use of the 5.1 as the rear speakers get very little sounds emitting. This is mainly due to the other vehicles you overtake running as quiet as a mouse which really doesn’t help the surround situation one bit.

Graphically Outrun 2 is a nice visual game but lacking the overall punch of other racers such as Burnout 3 which is just complete insanity the amount of particles and details rushing past you. Do not get me wrong though, the graphics are very good, but it just doesn’t bowl me over like Burnout 3 or indeed other top class racing games. You drive along at a rather sluggish speed sliding and running along the straights overtaking rather plain looking traffic that run as silent as the night.

Maybe I am being overly critical for Ourtun 2, but when you have played and loved so much Burnout 3, you can only think in one direction, and that is how great Burnout 3 is and how average the gameplay is in Outrun 2. I think the main mistake is that they have tried to remain faithful to the original classic so much that they dare not toy with it. Instead just enhancing the arcade mode with the latest graphics and extra cars for you to drive in the Ferrari line up.

Online is also a pretty boring drive using the arcade styling creating set routes rather then having the choice of left or right defining the course. Online can normally add something really exciting to even the most simple game, but even this does not for me save the Arcade racing mode which is still annoyingly and frustratingly slow and boring.

I am really searching my soul to say something nice at this point as my heart aches knowing and remembering how incredible the first title was, but maybe that was the problem. We were always going to look back all those years ago and dream, maybe even slightly exaggerating in our minds how the good the game actually was.

With so much competition on the Xbox in this genre, even the once superb arcade styling Outrun offered fails to impact on my nerves and as excited as I was on the announcement of this sequel, it will now itself be a memory after only a few weeks of play. 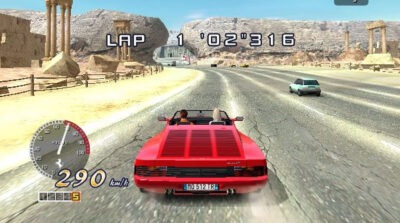