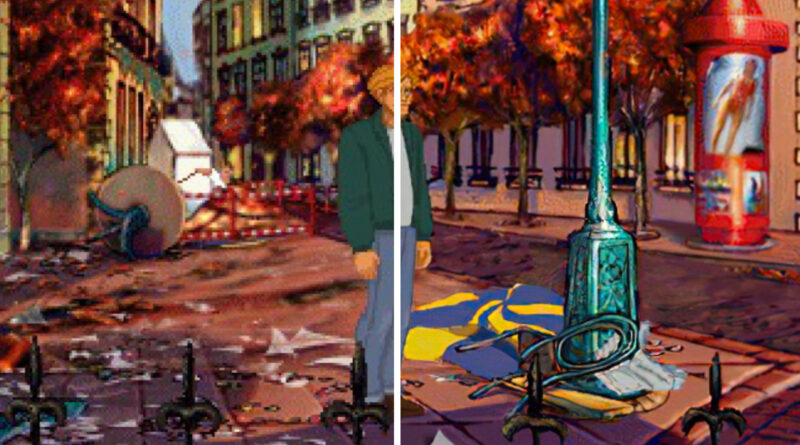 Tony Warriner who has featured on a few of my podcasts is one of the founders of Revolution Software, a British game developer known for various classic point and click adventures including the widely respected Broken Sword: The Shadow of the Templars.

Broken Sword featured George Stobbart, an American tourist visiting Paris in France, who somehow finds himself right in the middle of an explosion that would kickstart an adventure through Europe and the Middle East. He wouldn’t be alone though, as Nicole Collard a photo journalist teams up with George to help solve a conspiracy featuring the Knights Templar. It’s an epic tale and beautifully told through entertaining dialogue, stunning locations, enchanting music and a rich selection of characters. Broken Sword should be considered one of the best point and click adventures to ever be released – it’s truly that good.

Appearing originally in 1996, technology has certainly moved on from the 640×400 resolution available at that time and the wonders of AI upscaling technologies continue to be a source of interesting and sometimes controversial debate. Tony has also been imagining what a ‘remastered’ version of Broken Sword would entail and how modern tools could allow for an increase in resolution using the original assets.

Tony has been kind enough to let me share a sample with you here today. An original screenshot and one that has been ‘remastered’ using AI upscaling software…

Hey guys, take a look at these two images. One is original BS1, the other we’ve scaled using some fancy ai system to double res. Looks nice I think. Now imagine a pure BS1 Remastered

The AI upscale as you can see has doubled the resolution and improved the number of colours available for the assets to smooth out some of the dithering. There would be quite a few technical difficulties that would need to be overcome, however I will be discussing these with Tony in an upcoming episode of my Game & Gadget Podcast.

Just to be clear, this has been an experiment by Tony and nothing more at this point. I personally would love to see a remaster of the original title from 1996 and who knows – if enough of the community show an interest, this vision may even appear in the future!

One thought on “Broken Sword Remastered – Dreaming with AI Upscaling”